As promised, I need to relate my first experience with Eastern bathrooms. I said in a previous post that my hotel had Western-style bathrooms (in addition to those weird lady urinal things that I still don't understand and have yet to see again). The airport had Western bathrooms too, so my first experience with anything out of the ordinary came when I wanted to take a shower at the hotel the morning after my arrival. I decided to scope things out the night before so I'd know what I was dealing with and went to the 9th floor where the showers and tub were said to be. This is what greeted me: 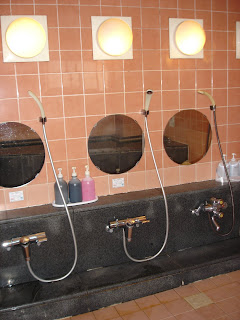 The faucets are set to about knee height and the sprayer heads are not in a position that you could back against them as you would in a Western shower. Also, there's a distinct lack of privacy between you and your neighbor. I decided I wasn't entirely comfortable with this set-up. I had no idea what I was doing and the chances were pretty good, based on the number of women on my hall, that I'd end up in there with at least one of them while trying to take a shower.

I hadn't yet decided if I'd rather walk around dirty for a few days or if I'd just suck it up and, in the end, I decided that I'd give it a go because if nothing else it would make for a good story. I woke up early on my first morning in Tokyo, expecting that I may end up alone after all. No such luck. There was another woman in there already but I couldn't see her very well since there are sliding glass doors that are heavily opaqued from about knee height to the top of the door that block the bathing area from the rest of the bathroom (keeps the sauna effect going in there). I did my best to discreetly bend over and try to watch to determine what I should take into the bathroom with me (towel? clothes? those slippers they make you wear around the hotel?) and decided to leave EVERYTHING behind and walk in there with only my toiletries. 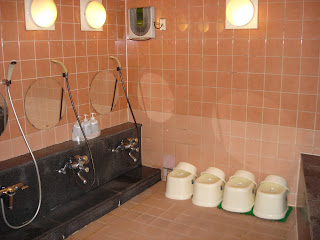 Protocol seemed to be to grab one of these little white stools pictured above as a seat and to take one of the shallow buckets to help you rinse. Sitting on the stool, those mirrors are the perfect height for use. So I grabbed one and sat down. I had a recent experience trying to take a shower in Stephen's tub with a hand sprayer in DC before I left the country. It resulted in excess water working its way through the walls and floor and flooding the downstairs via a light fixture. I was sure I was in for a similar outcome in this situation. I sprayed as carefully as I could with someone else sitting two seats away, but when she left I tried to turn the sprayer into a more Western shower and ended up spraying EVERYTHING--walls, ceiling, the sliding glass door, the hot tub behind me. A bit embarrassed about the mess I was making and certain that there would be other women coming in to shower while I was there, I decided to skip sitting in the traditional Japanese tub (which was actually part of the reason I booked this hotel). I got out of there just as another woman was walking in so I felt pretty good about my decision. 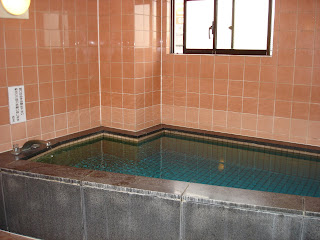 I decided that was the last time I needed to attempt the use of that shower while I was in the hotel and I would be better off just waiting until the following evening when I got to Wes's place in Iwakuni. He lives on a Marine base there and I was confident that the military wouldn't subject its poor soldiers to something as unfamiliar as Eastern bathrooms.

As I was sight-seeing around Tokyo I also had the good fortune of finding Western-style toilets along the way. I knew that those fabled "holes" were out there but I had yet to use one. That is, until I arrived at the train station in Iwakuni. For those of you who haven't seen these toilets before, here's what we're dealing with: 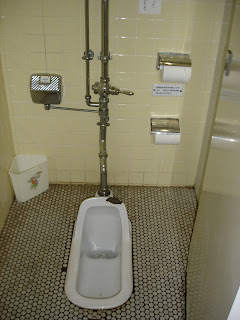 You squat over the hole, aimed forward at the plumbing (and if you're lucky, the toilet paper) and do your business. Most of these toilets have hand rails to grab onto to stabilize yourself while you squat. The one pictured above was missing this key feature. The very first toilet I used like this did not have toilet paper so I was exceedingly glad I was advised to bring some with me. These bathrooms are always an adventure. There's something odd about squatting to pee and not being in the woods. I'm always worried that I'm going to stand up and discover that I've peed all over the back of my jeans. Wouldn't that be fun?? To walk around all day covered in pee?!?

Most bathrooms here do not have soap and none of them have paper towels. Only the bathrooms in major train stations or in airports seem to have hand dryers and most locals keep a handkerchief in their pockets to dry their hands after rinsing them off. I keep hand sanitizer with me at all times to deal with this problem. I find this situation odd, especially since the Japanese are some of the most germaphobic people on this planet. There are sick people walking around with surgical masks covering their faces so that they don't cough or breathe on someone and spread their germs. But there's no soap in the bathrooms!! I just don't get it.