Wes and I had been trying to work out a plan to coordinate schedules and figure out a time and place to meet up upon my arrival in Iwakuni. Despite my best attempts, I wasn't able to find anything online that hinted at the train schedule for the high speed bullet trains (Shinkasen trains). I had no idea what the process would entail, only that it would take several hours to get from Point A to Point B.

I made the mistake on Wednesday to not pace myself while exploring Tokyo and ended up completely wiped by 5:00 pm. I had a beer, wrote in my journal and decided to lay down for a nap and get up a few hours later for dinner before actually packing it in for the night. I set an alarm for 7:00 but never heard it go off. I woke up at 10:00 and decided that was too late to eat and go back to bed, so I stayed put and fell back asleep. Seemed like a good idea at the time. Until 3:00 am, when my body told me it was time to get up. I royally screwed up my body's schedule by falling asleep so early and forced myself to stay in bed until at least 5:00. It was no easy task because I had the good fortune of having a horrible old troll of a woman who decided to chain smoke her way through 2 packs of cigarettes inside her capsule and the smoke circulated its way throughout the hall and into the ventilation system inside my capsule, where I couldn't escape. I had decided that if I smelled one more cigarette that I was going to jump through her capsule curtain and stomp on her. But she checked out at just after 4:00 am, and I was able to get a few more hours of sleep.

I got up before 6:00 and started my day. The lockers provided by the hotel were way to small to fit my luggage without unpacking my backpack so I was charged with the task of repacking everything. I had done this the night before I left Stephen's house to catch my flight and, according to David who was waiting for me to call him back before I went to bed, the process took almost an hour! I knew that I had to allow myself plenty of time to get ready to hit the road so I spread everything out in the locker room and started repacking. I took my time, wrote in my journal, recharged my iPod and camera battery and was ready to go search for some food by about 8:30.

The traditional Japanese breakfast is not something I think I can stomach that early, consisting of a salmon fillet, hot soybeans, a raw egg and some rice. So instead I ordered a pork bowl with onions and rice. Much more American-friendly. I returned to the hotel to retrieve my bags and start making my way to the Tokyo subway station (which involved several line changes) with the ultimate goal of activating my Japan Rail Pass at the Tokyo station. I was in the elevator coming downstairs to check out when I met a guy who could actually speak English! He told me he'd slept terribly because the man in the next capsule was drunk and snoring loudly all night. I exchanged the story about the chain-smoking troll on my hall as we headed downstairs. We parted ways but met up again in the train station several minutes later as I was studying my subway map trying to figure out the best way to do things. He'd been looking for a vending machine before heading to the Tokyo subway station and I told him I'd walk with him to the local convenience store if he'd help me navigate through the subway system. Turns out we were both trying to catch a Shinkasen headed south (he was going to Nada).

Julian von Harras, my new Dutch friend, rode the long way around to the Tokyo station and helped me find the JR Exchange office in the enormous labyrinth that is the central train station. We managed to score seats across the aisle from each other on a non-reserved car and chatted the whole way until he got to Kyoto and had to change trains. It was so nice to be able to speak to someone in English. I told him I had spent most of the last two days in silence or bowing and saying the one phrase that has come to be so important to my existence in Japan--"arrigatoo gozaimasu," which means "thank you." I was sad to see him go, but excited to see Wes.

I had to change trains at Osaka and catch a train bound for Hiroshima, where I had to transfer to a local train bound for Iwakuni. I left my hotel just after 9:00 am and had boarded the subway half an hour later. My high speed shinkasen left Tokyo at 11:04 am and I didn't arrive in Iwakuni until 4:50. Wes had said something about the bullet trains taking about 4 hours from Tokyo and then an additional 45 minutes from Hiroshima, which turned out to be pretty accurate with the short layovers I had in between trains, but it was such a long day of travel! Nearly 7.5 hours when it was all said and done. Whew! I have to do it all again on the way back too, which eats into any time I would have liked to have spent exploring the city. Oh well.

I thought Wes might be waiting at the train station for me at 5:00 as we had discussed, but when he didn't show I grabbed a cab to base (as was our back-up plan). I made it on base and back to his place with only a minor snafu at the front gate (Wes forgot to bring my base papers with him when he came to the gate to get me and had to go back to his apartment for them). We met up with a few of his friends for dinner and headed out for their favorite sushi place downtown. We sat at the bar and there was this little old guy behind the sushi counter put me through a sampling of his choice (all you have to do is say the magic word - Omakase!"). According to the guys, he's been there forever so I trusted him entirely. 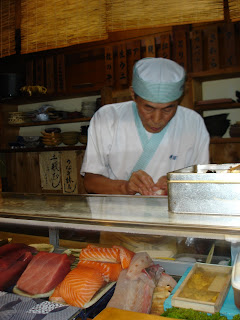 I started with fatty tuna, eaten with wasabi and soy sauce. It was phenomenal! Then he gave me what I think was mackerel. He told me to eat it without soy sauce, although it had some wasabi under the fish. 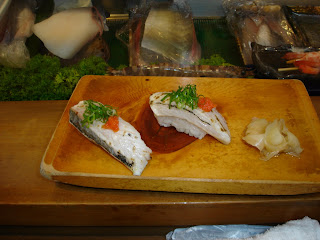 Next was squid, eaten without wasabi or soy sauce. I had never had squid like this before and it was slightly chewy and had a peppery flavor. I absolutely loved it! 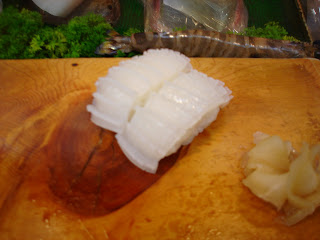 Wes's friend, Jason, shared a piece of his tuna with me which melted in my mouth. I had a few other courses, which included salmon, egg and a cucumber hand roll, all of which were fantastic! Wes insisted that we try some scallops, as they hadn't yet found their way onto my plate. We got baked scallops in butter sauce on the half shell. 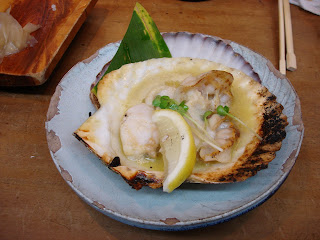 I loved the presentation! This place really knew how to do things right! And the best part is that I had the best sushi of my life, several rounds of drinks and the tab was less than $40!! What a great introduction to Iwakuni! Definitely the perfect end to a long day on the road!