On Sunday, Wes and I headed to Miyajima, located on Itsukushima Island, to spend the day visiting shrines. The train from Iwakuni was about 20 minutes and we caught a ferry to the island, which took another 10 minutes. On the ferry ride in, passengers can see the floating Torii Gate, which welcomes visitors to the island. 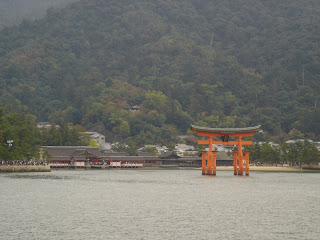 I had done only a little reading about Miyajima before visiting (pretty much par for the course) and had seen a little blurb about the deer on the island. Wes had also mentioned them and I was prepared to see a few but I had no idea they'd be so prevalent. Or so bold! They flock to the touristy spots, especially near food stands, to try to score a snack right out of your hands (or out of your bag). 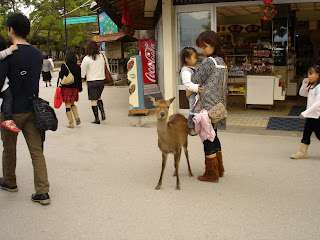 Wes has been to the island three time before our trip and told me about his friend attempting to "share" his french fries with a deer, only to have the thing try to stand in his lap and steal the bag right out of his hands. They're not scared of people and will often allow you to pet them. Food cart owners spend a lot of time shooing them away lest they sneak a sample their wares. Though most of the deer have their antlers removed, its no wonder you see signs like this scattered across the island. Duh! 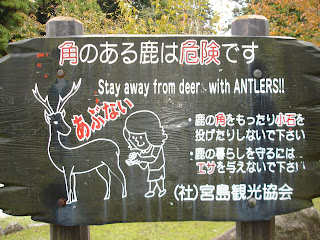 The deer are allowed to roam free (though their population is regulated). They are considered sacred in the native Shinto religion because they are considered messengers of the gods. Try telling that to someone who just got their lunch forcibly stolen! 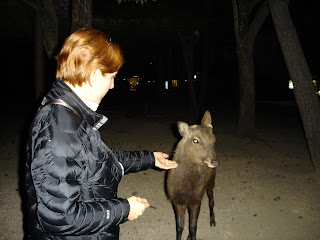 Wes and I headed toward the Itsukushim Shrine and scored a better photo with the Torii Gate. It was built in 1168 of camphor wood and is about 48 feet high. At high tide the gate appears to float, but visitors can walk down to it in the mornings before the tide comes in. It is common for visitors to place coins in the cracks of the legs of the gate and make a wish. 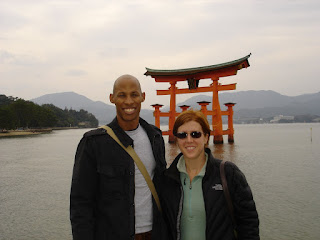 The Itsukushima Shrine, which dates back to the 6th century, is one of Japan's most popular tourist attractions--no mystery there. It's really cool! It juts out onto the sea on stilts! 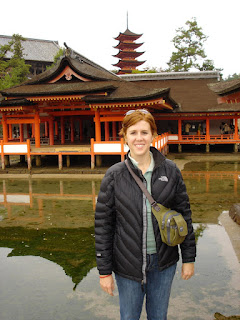 The temples and shrines on the island are part of the Shingon sect of Buddhism, which is known as esoteric Buddhism in Japan. The sect teaches that humans can attain enlightenment through rituals combining physical, spoken and mental disciplines. Their deities are noticeably different from other Buddhist sects I've yet seen (some are downright frightening). This Kona looks like a watchdog from Hell! 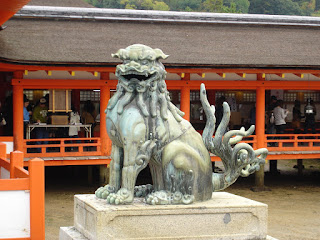 This Fudo Myo-o deity inside the nearby Daiganji Temple isn't much better. His fierce facial expression shows his strong determination to make humans follow Buddhist teachings. Or else.... 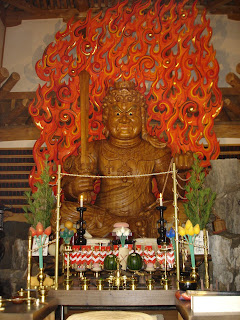 The island is very scenic and there are nature hikes all over the place. There are also several really large trees, as evidenced here: 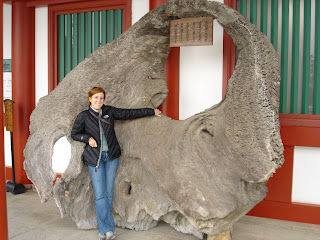 We found a little hike off to the side of a few shops (it wasn't clearly marked) and found a small two story Pagoda at the top. It was cool, but the view from the top of the hike was more what I was interested in. The large building in the back with the sloped roof is the Komyoin Temple. Its also a good shot of the 5 story Pagoda and the Itsukushima Shrine. 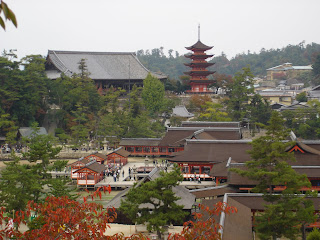 This was the direction Wes and I were intending on heading, but cut through a side street and discovered a part of the island that Wes had not been to before. We ended up hitting the mother load when we found the Daisho-in Temple! The Niomon Gate serves as the official gateway into the temple. A pair of guardian king statues guard the gate and are said to ward off evil. 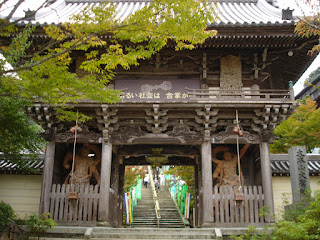 Wes has a thing for small Japanese statues and we discovered a little treasure trove of 500 Rakan Statues. They are representative of Shaka Nyorai's disciples and each one has a unique face and expression. There are several women among the bunch too. This is one of my favorite shots: 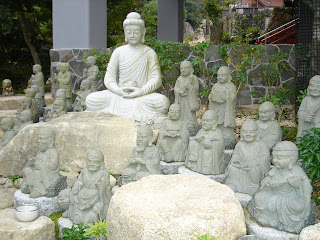 After winding our way uphill through the statue garden, we came out by the belfry. This bell used to be rung to tell the time in the morning, afternoon and evening but is now used to start the time for worship. It makes the most gratifying deep sound and Wes liked it so much that he walked around for the rest of the day saying, "BONGGG!" 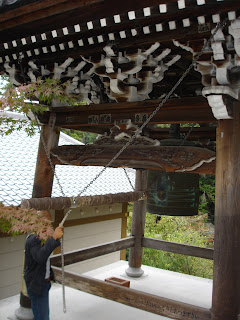 As I mentioned previously, the Shingon sect of Buddhism has different deities than other sects. This is Shaka Nyorai, or Shaka Buddha, entering Nirvana surrounded by his sixteen disciples. 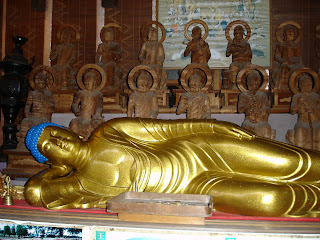 There is an entire room in the Maniden Hall dedicated to 1,000 images of Amida Nyorai, or Buddha of Infinite Light, who is believed to take the deceased to West Paradise. 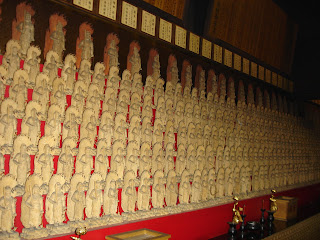 These seven Mizukake Jizo Bosatsu statues are centered on the one believed to redeem the spirits of deceased babies and children. Worshipers pour water on each of the Jizo images to console the souls of loved ones. 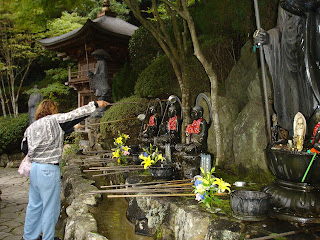 Of all the unexpected things we discovered on the temple grounds, the Henjyokutsu Cave was by far my favorite. It was kind of eerie to walk inside but once your eyes adjusted it was truly amazing! It houses icons of the 88 temples of the prestigious pilgrimage route on Shikoku. Worshipers believe that they are given the same blessings as people who make the pilgrimage to all the temples on the route. 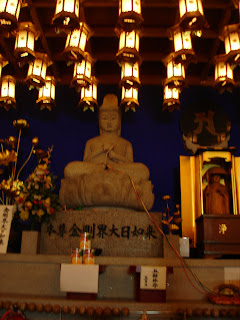 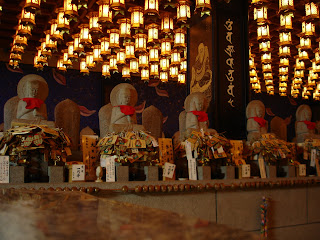 Throughout the complex there are prayer wheels. It is believed that spinning these Mani wheels invites blessings equivalent to reading one volume of the Hannya-shinkyo, or Heart Sutra. Spinning other wheels around the temple grounds are thought to bring you enormous fortune. I spun as many as I could! 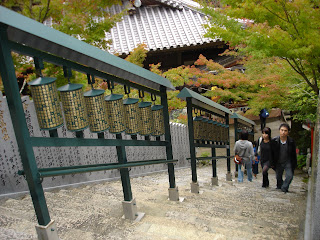 The grounds directly outside the temple are maintained as meticulously as those inside. I could see a small waterfall above the temple and took the walking path to investigate. Here's a view of the temple grounds from above: 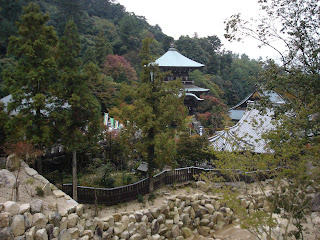 It was starting to get dark so we headed back down to the main village to find some grub. Wes had been on the island back in February during an oyster festival, so we knew exactly what we wanted. Unfortunately, the place he'd been before closed at 4:30, so we missed out. But we were able to find another place a little further down the road that was serving up barbecued oysters. These guys are total pros! 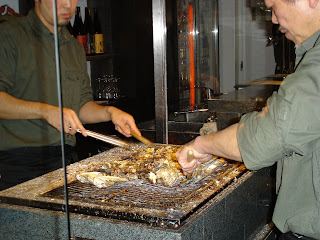 On a more random note, there is a style of wooden spoon used to serve cooked rice without impairing the taste that is said to have been invented by a monk who lived on the island. These spoons are popular souvenirs and means of relating handwritten prayer in several shrines around the island. Here's the biggest one in the world! It is made of 270-year-old Zelkova tree, took 2 years and 10 months to create, is 7.7 meters long and weighs 2.5 metric tons! 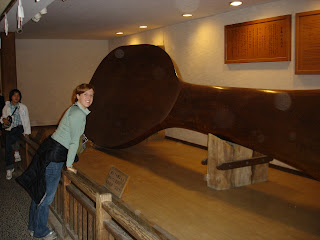