Illness Is NEVER Part of the Plan

So this is day 5 in Dali, when we had only intended to be here for one night. We've been staying at the Jade Emu International Guest House, which I cannot say enough wonderful things about. As I mentioned in my previous post, David came down with what we thought was food poisoning the morning after we arrived. The hostel staff upgraded us from a shared dorm to a private room for no extra charge, they lent us a DVD player, movies and a heater for free and they've been providing meals directly to our room (and last night they made us food after the kitchen was closed). David attributed his condition to a bad burrito, which initially made sense since I didn't have one. But I came down with the same illness two days ago, which knocked me flat in a hurry. One of the hostel owners thinks it might have been the pizza we shared on our first night in town--apparently there are only two reputable place to get a pie here and we didn't eat at either of them....

Luckily, the onset of my food poisoning came around the time he started to feel a little bit better. Don't get me wrong, he's four days in and not back to 100% yet, but he sucked it up and took care of me when I needed it. My symptoms started at 10:00 pm two nights ago and by 11:30 I was shooting things out of both ends on a predictable half hour schedule. By 1:30am, I'd had enough and asked David to take me to the hospital. He woke up the hostel staff to ask for assistance (one of the owners of the hostel came with us as a translator, despite the fact that she's at least 6 months pregnant and stayed with us at the hospital through the night), helped me to the cab and stayed with me all night in the hospital while I received a shot in my butt to stop the nausea and vomiting (which didn't work immediately and I threw up 7 more times--once on David's sandaled foot as he was helping me to the bathroom), and received two IV drips. He was dehydrated and still suffering but he stayed by my side all night and returned to the hospital with me at 3:00 the next afternoon (as instructed by the doctors) to receive 3 more IV drips. All told, he was in the hospital with me for about 14 hours. I'm really lucky to have him!

For those of you who've ever wondered what hospitals overseas are like, they're everything you'd expect. The place was dirty and nowhere close to sterile. I'm not sure I could venture a guess as to when the sheets on my bed were last changed. I found at least one bug in my bed and saw other (smart!) patients bringing in their own sheets. There are grease stains on the walls behind each bed where people have rested their heads. The paint is chipping and peeling all over the hospital, the floors are dirty (there were cigarette butts on the floor in my room) and disposable items like used Q-tips, Kleenex and needle caps were thrown on the floor. The architecture of the building was not closed and the exterior doors were removed--kind of courtyard style. The room I was in had doors and due to our body heat, the temperature was bearable, but it was by no means a heated room. Also, the only bathroom for the building was an outside W.C., which was about a two minute walk from my room. And when you have diarrhea, that's never a good thing!

Here I am about 30 seconds from throwing up for the 10th time in 5 hours. I jacked a trash can from the hostel as a barf bucket (you never know if they'll have what you need ANYWHERE in China, so its best to go prepared). That's Song, the hostel owner, behind me. She was up all night with us and is a total champ! 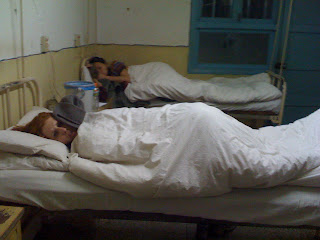 I was concerned that I would be given used needles but David (who has had EMT training) assured me that he recognized the needle packaging and watched the nurse prep the tray. I got stuck 3 times on my first hospital visit (1 shot, and twice for my IV). They missed the vein the first time and were pumping fluid into my skin, which swelled up painfully over the course of a few hours and had to be moved to my other hand.

The doctor came in to check on me at 7:30am during my first visit and was concerned when I told him that I wasn't feeling any better than when I had arrived. I was discouraged by this too, since I thought that was the whole point of going to the doctor! We went back to the hostel and rested for a while and a few hours later I was feeling much better. But then I started to backslide by about 1:30pm and was glad I had been instructed to return around 2:00. They hooked me up to another round of IVs, with the same results (no immediate improvement, though I felt great hours later). But this time, things stayed positive. I was able to eat some solid food and I'm feeling almost back to normal now.

David didn't receive the same course of treatment as me, though I tried to get him to go to the hospital when he started feeling awful during that first day. He never felt bad enough to risk the hospital, so we never went and instead, he started a course of antibiotics that my mom had insisted we take with us. Not sure how much they helped over all though. He also ended up with a prescription for some pills to ease his stomach pains from the doctor while I was at the hospital. But he hasn't recovered nearly as quickly as I have.

If nothing else, our respective treatments were very inexpensive. David's pills were $2 and both of my hospital stays were $35 total. The difference in treatment though is that I'm almost symptom-free and David had a bit of a relapse last night. After some early morning texting with my mom, who contacted Dr. Luckmann, we were reassured that we were both on the mend and would expect to make a full recovery shortly. My experience has been very much like previous bouts with food poisoning, though David assures me he's never experienced something so severe or long-lasting.

With any luck, we'll be well enough to travel tomorrow and will be on our way to Vietnam. Happy Thanksgiving to everyone! If you're ever in Dali, please stay at the Jade Emu. They really are fantastic!
Posted by Katie Murphy at 12:24 AM