After leaving Chengdu a few days ago, David and I continued heading south in attempt to make our way to the Vietnam border (I think at this point we've scrapped Laos, since we're killing more time than expected in China). We took an overnight train to Panzihihua and from there caught a bus to Lijiang (we had no idea how long the bus ride was and it turned out to be 8 hours!). Up until this point in the trip, I was under the impression that China was dirty, brown and rather ugly. All the scenery we could see through train windows was rather limited (most of our trains have been overnight trains) and communities beside the railway are less than middle-class. There are always large trash heaps and dilapidated houses nearby and I was starting to think that this was representative of China. And my how I was proven wrong! 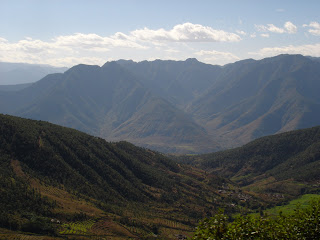 Welcome to the Yunnan province in Southern China, where everything is lush and green! We entered the foothills of the Himalayas, where I was rewarded with some of the most amazing views of the trip. Its everything you'd think China would be--tiered fields full of crops, rice paddies, farmers working their fields in straw hats, people hauling things in baskets on their backs or using their mules. It was great to see firsthand that these things really do exist! 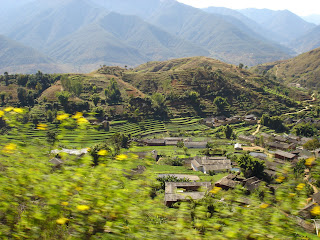 We arrived in Lijiang after dark and found a hostel in the Old Town (which we love!!). This section of town is more than 800 years old and is separated by streams and tributaries running from the Jade River. The streams run along side all of the streets and divide the neighborhood into hundreds of smaller streets and alleys. The streams also sometimes create a moat around restaurants and bars, which necessitates the use of planks to cross (not a good place for clumsy, stumbling drinkers...). The streets are paved with the original red breccia, which gives it a really rustic touch. 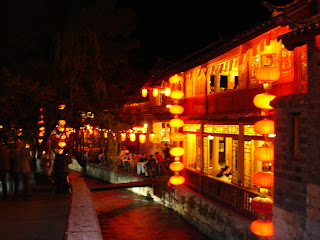 Everything is lit with red lanterns, which gives it a really cool look. There are vendors set up at all hours of the night hocking their handwoven pashminas, scarves and clothes. Jade and silver jewelry, tea houses and natural health providers are also everywhere. David and I popped into a store along the way and bought some yak meat! Yum! 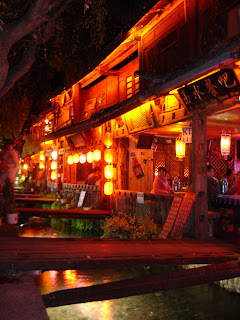 We had only intended to be in Lijiang for one night before heading to the Tiger Leaping Gorge but plans changed and we stayed two nights instead and skipped the Gorge. When this is the view from your hotel, how can you not stick around?? 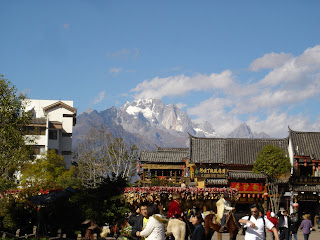 Lijiang turned out to be an unexpected highlight of the trip! We're currently in Dali (which was said to be as good or better than Lijiang by people who obviously don't know what the hell they're talking about!). We decided immediately that we didn't like it as well as Lijiang and would only stay one night on our way to the Vietnamese border. But things never work out quite the way we plan them and David is nursing a nasty case of food poisoning that he thinks he got from a bum burrito at dinner last night. Note to self: burritos in China are not a wise move! If all goes well, we'll be on the road again tomorrow. Until then!
Posted by Katie Murphy at 2:09 AM