Even More On Eastern Bathrooms!

I've discovered that in China, people don't give the reverence and respect to the Western toilet as do the Japanese. I find this highly disconcerting as I have come across several of the top "Worst Bathrooms of All Time" here in China. People pee on the seat and don't clean it up (which would be hard to do as there is NEVER ANY TOILET PAPER! Word to the wise-- BRING YOUR OWN TP!), they leave their smoldering cigarette on the tank while they do their business, marring the porcelain, or they can't figure out the whole seat thing and they pee on the floor directly in front of the toilet rather than aiming for the hole. This is a very mild form of what I'm talking about.... 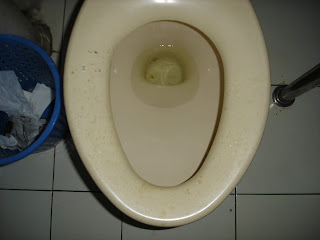 Another thing that surprised me is that, when it was available in my hotel in Beijing, that toilet paper was so durable and rough that it could have been used as Tyvek wrap to weatherize the exterior of a house before the siding goes on! Its really incredible! They seem to have gotten things backwards because the napkins are as soft and flimsy as Western toilet paper, which does nothing to cut the grease on the food you're shoving into your face.
Train bathrooms are some of the most disgusting places on Earth and I'm loathe to even touch the door to ensure privacy, let alone anything else required to do my business. They're always Eastern-style in China (though that was not the case in Japan). People have no regard for aiming their butts toward the hole at the bottom of the toilet to ensure that the tiny amount of water used in flushing (keep in mind it doesn't only spray INTO the toilet, as would make sense. Your feet are going to get showered too!) would be enough to move things along so that the next person doesn't have to smell your waste while tending to business of their own. Its really a wonder David and I haven't contracted some mutant strain of Staph at this point, but that's why I keep hand sanitizer on me AT ALL TIMES (which they don't sell in China).

The plumbing systems here don't have the containment capabilities that American toilets have. There is no U-bend in the pipes to ensure that you're not smelling the waste directly under your feet. Also, the sanitation department doesn't seem to have a handle on how to process toilet paper so when you can use it, you're not allowed to flush it. Imagine walking into a bathroom where there is piss all over the floor, a big turd sitting in the bottom of a toilet with no water in it and a wastebasket full of poopy and bloody toilet paper. No imagine that its hot and humid in there and you'll start to get a sense of what I'm talking about. 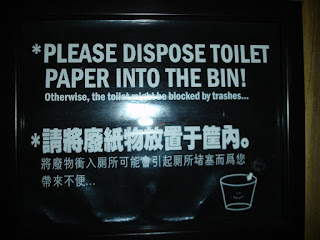 There are lots of public toilets all over the place. I can tell because I walk face first into that distinctive raw sewage smell about every 50 feet or so. Its very distinctive as the diet here consists largely of processed, fried and fishy things. The human body does funny things with these components and its ALWAYS smells disgusting. David's nose doesn't work properly so he can't smell it, and for that he is lucky. But we both agree how bad the toilets are around here and do our best to contain things until we can get back to our hostels, which almost always have Western-style toilets. Next time you spend an extended time in the bathroom and can use toilet paper and then flush it so it doesn't stink, think of us and count your lucky stars that you're not dealing with Eastern plumbing!
Posted by Katie Murphy at 6:55 AM