Never in my life have I experienced anything as nonsensical as the rules of the road in China. Whether you're a pedestrian or a driver, you're always in danger. People here are very comfortable with traffic patterns but to me it feels like one big life-sized version of the Atari game "Frogger." The traditional road rules that Westerners take for granted are willfully disregarded, often times with police sitting in plain sight. Traffic laws either don't exist, or are merely suggestions.

Thus far, I've had experiences as a pedestrian and as a passenger in cars and busses. Here are some of the things I've noticed:

DRIVERS
1) Stop signs/lights mean NOTHING. Even police will run red lights by several seconds.
2) What looks like a 2 lane road is actually a 5-lane road (two lanes, two shoulders, and the middle) when passing is involved.
3) Changing lanes in intersections is highly encouraged.
4) The game "Chicken" played with oncoming traffic is practiced every few miles. You learn to watch for people passing slower vehicles in the oncoming lane and move to the shoulder to allow them room if they don't have time to shoot the gap. No horns necessary, its just a (scary!!) way of life.
5) That "bike lane" is not reserved for just motorcycles and bicycles. Busses will threaten to plow down anything in their path if they're in a hurry.
6) Right on red is a given (and often left on red).
7) EVERYONE honks at everyone else. If your car doesn't have a horn, chances are you will either hit someone or be hit yourself.
8) Cars move slowly and aggressively. Average speed of traffic is like 10-15 mph in town, 15-25 mph on major roads, 40-50 mph on highways.
9) The left lane is not the fast lane--its for cruising. The fastest way through traffic is often weaving.
10) When cars put on their blinker, they're not fooling around. Move over or be run over.

PEDESTRIANS
1) Pedestrians are aggressive about crossing the street. They step into oncoming traffic without a second thought to safety.
2) Just because you have a green "walk" light (animated!) does NOT mean you can expect to cross the street without fear of becoming road kill. It's merely a little less Frogger-style.
3) Just because you have a red "don't walk" light doesn't mean you can't cross the street. Most of the time you can cross halfway and watch for oncoming traffic for the other half.
4) Even if cars have a green light, pedestrians will play Frogger and move step by step across the street, often standing on stripped lines while cars pass. Move slowly and predictably and you won't get hit.
5) Just because there's a sidewalk present does NOT mean its reserved for pedestrians. This is often prime parking real estate. Sometimes its another driving lane for cars and bikes! (Pardon the blurry photo, I was on the move dodging traffic. You'll see traffic moving in the opposite direction and the silver & blue divider for a bike /motorbike lane. This Car is definitely on the sidewalk!) 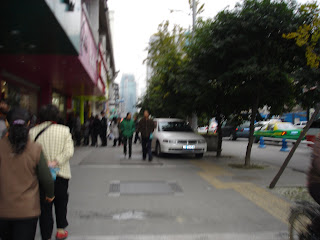 6) People walk the way they drive--they don't move out of anybody's way. If you don't plan your path beforehand you will run directly into people.
7) Sidewalks and stairs are often granite or marble and are like skating rinks when wet.
8) Sidewalks are also divided by raised yellow rubber indicators (as part of navigation for the blind) and are equally as slick when wet.
9) Puddles may not have a foreseeable bottom and are always full of foulness I won't describe. David stopped wearing sandals in the rain, if this is any indication of how bad it gets....
10) Exposed dirt from sidewalk excavation always becomes a huge trash pile for pedestrians.
11) If there are no public toilets in sight and your 2-year-old has to pee, watch out because he's going to spread it on the street (or in the trash can at a restaurant) and take care of business.

There really is a method to the madness here, its certainly not the Western way of navigation and its taken some getting used to. I understand that the further south we move, the more adventures we're bound to have. Vietnam is supposed to be even more precarious. Stay tuned, more on this topic I'm sure!
Posted by Katie Murphy at 5:24 AM