After a night of sushi and drinking in downtown Iwakuni, Wes and I got a slow start to the day on Friday. We took it easy and kept it local, heading to the Kintai Bridge in the middle of the afternoon. Its very distinctive and is a local treasure, although the current bridge is only about 55 years old. The original bridge, which was built in 1673, was washed away by a typhoon. The design of the original bridge was so good that the engineers in charge of the researched noted that the techniques used were in perfect accordance with modern dynamic principles. Modern engineering could not improve it. Its pretty cool looking too! 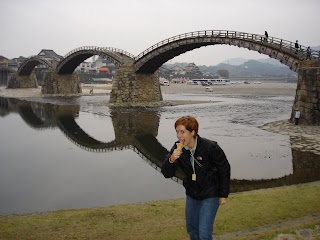 After crossing the bridge, we entered into a little tourist district before Iwakuni park, which is home to several temples and shrines. I insisted we do the tourist thing briefly and we had a killer photo taken as Geisha girls! Wes looks so cute and helpful pointing the way in his little red kimono! 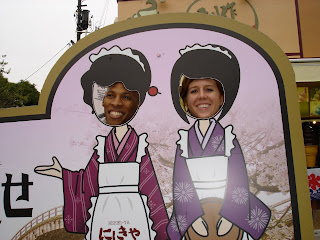 We wandered around the grounds for a few hours and came across the Shirayama Hime Shrine, which Wes had never seen in any of his previous visits. I went inside ahead of Wes, who was taking photos outside and removing his shoes, and jumped a mile in the air when a monk slid open a wall panel and came up behind me while I was studying the architectural detail. When Wes joined us, he gave us some history about the building, which had been burned by arsonists several times throughout the last several centuries. He gave us an Oracle in English (instead of Kanji, like they're written EVERYWHERE) and explained that if our fortune was excellent then we should tie it to a tree outside. If the fortune was less than excellent, we should keep it and come back one year from now and draw another fortune and hope for better luck. 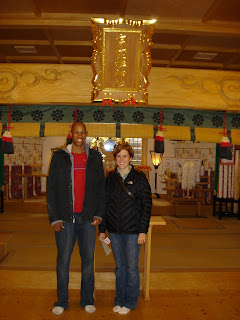 Wes had an excellent fortune so he tied his to a tree, but mine was only good so I kept it. It said, "Your time is coming and you're becoming happier and happier (how true!). You will be able to realize what you have in your mind. But a sudden misfortune will happen to you in case you should be careful." It goes on to detail your fortune in a categories like "expected visitor" - He will come! (David is meeting me in Beijing! Yay!), "missing thing" - It will be found near around you (I lost my base pass and it was inside my Japanese phrasebook...right where I left it!), and "travel" - No problem (GREAT!). There were several others but I figured business, speculation, game & match and childbirth really had nothing to do with me right now.
We wandered through the Graveyard of the Kikkawa Family, who were the ruling lords in the area for hundreds of years. Wes kept walking into spider webs and couldn't figure out why. We were in a section of the park that was off the beaten path and he's the tallest guy around for miles. The rest of the population is my height or significantly shorter. There were no other tall guys around to knock down those spider webs at eye level for him so he was in charge of clearing his own path. And there are some BIG spiders here! To Wes' credit, he only screamed like a girl once! Go Marines, Oorah! 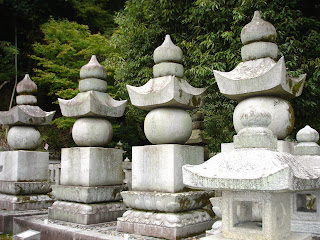 One of the big reasons we went to the park (other than to see the bridge) was to visit the Iwakuni Castle at the top of the hill. Its this beautiful white donjon castle built in the Momoyama-Nanbun style of the late 16th century, and many a "Harold & Kumar Go to White Castle" joke was made that afternoon. Unfortunately, the cable car running to the ridge line was undergoing some maintenance and we didn't get to see it. We had talked about hiking up instead but by the time we saw everything in the park that we wanted to see, we were losing daylight quickly. It gets dark here so fast! At 4:30 the sun is already setting, which is really depressing as its only October! Wes said the winters here are pretty brutal and I can see why!
We packed it in and headed back to base to meet up with some of his friends for a dinner at Ganesh, this local Indian place, which was really good! We bar-hopped around town again and ran into some pretty funny Halloween costumes in the process. Despite all the scary movies that had been on TV earlier and the people walking around base in costume, Wes and I kept forgetting that it was Halloween!
*****
On Saturday we headed to Hiroshima for the day. The weather was beautiful and we had gotten an earlier start than the previous day and were able to enjoy the sunshine! For me, Hiroshima was on the "Must See" list because of my hometown's participation in the Manhattan Project during WWII and the devastating results it had after the Atomic bomb was dropped. Not that my family and I had any personal connections to the development, manufacturing or assembly of bomb parts, but its very much a part of our hometown history because Oak Ridge would never have been built had it not been for these purposes. Its always odd to visit a place overseas that has experienced tragedy as a direct result of American action, but this place was especially sobering because I was particularly familiar with some of the more gruesome details through Oak Ridge's involvement.

I'm not sure what I was expecting, but Hiroshima is an exceedingly modern town, with all of the glitz and glam of Tokyo without the dense population. Wes and I likened Tokyo to Manhattan, while Hiroshima would be more like Atlanta. Iwakuni is kind of like Oak Ridge, except with a nightlife and a military base. We came in through the train station, which is directly connected to a shopping mall. After getting lost inside and having some degree of difficulty finding our way out, we managed to catch a cab to the Hiroshima Peace Park. We walked past the Hiroshima Peace Memorial Museum, deciding that we'd start outside to enjoy the weather. The first stop was the Memorial Monument for Hiroshima, City of Peace. The stone chamber in the center contains a register of deceased A-bomb victims (140,000 by the end of 1945). The arch shape represents a shelter for the souls of the victims. 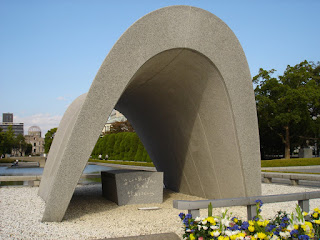 In the background of this photo you can see the Peace Flame, which has burned continuously since it was lit in 1964. It will remain lit until all nuclear bombs on the planet are destroyed and the planet is free from the threat of nuclear annihilation. Beyond these two memorials is the Children's Peace Monument, which is dedicated to the memory of the children who died due to the bombing. The statue is of a girl with outstretched arms with a folded paper crane rising above her. The statue is based on the true story of Sadako Sasaki, a young girl who died from radiation from the bomb. She believed that if she folded 1,000 paper cranes she would be cured. There are glass containers behind the memorial that contain thousands and thousands of folded paper cranes from all over the world. The paper cranes are left by other memorials as well and throughout Hiroshima as a symbol of peace. 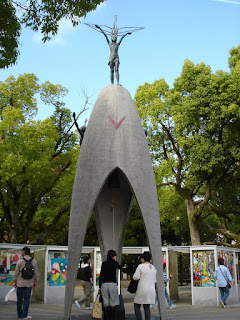 Next we stopped at the Peace Bell. There are inscriptions on the bell in 3 languages and are translated as "Know yourself." People are encourage to ring the bell, so I did! 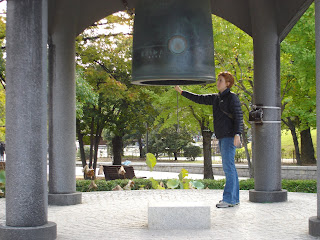 We made our way to the Atomic Bomb Memorial Mound, which is a large, grass-covered knoll that contains the ashes of 70,000 unidentified victims of the bomb. When remains are occasionally identified, they are returned to the victim's family. 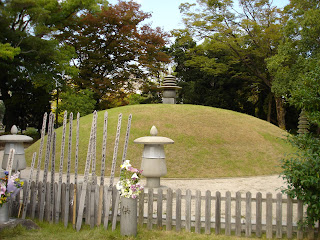 There are several smaller memorials around the peninsula, but the biggest and perhaps most recognizable attraction is the A-Bomb Dome. Formerly the Industrial Promotion Hall, it was the building closest to the hypocenter (point on the ground beneath an air explosion) of the nuclear bomb that remained at least partially standing. After much debate, Hiroshima decided to preserve its skeletal ruins in memory of the casualties. The A-Bomb Dome, to which a sense of sacredness and transcendence has been attributed, is situated in a distant ceremonial view that is visible from the Peace Memorial Park’s central cenotaph. You can see it in the background of my first Hiroshima photo above. Its hard to know how to pose in a picture like this with such serious subject matter.... 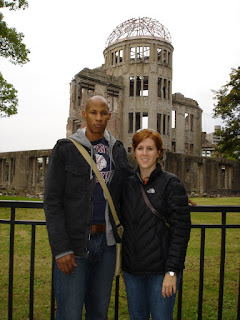 After walking around the A-Bomb Dome for awhile and taking shots from all angles (they have real cranes living in the ruins, which seems so symbolic given all the folded paper cranes throughout the park), we headed back to the Hiroshima Peace Memorial Museum. They don't let you take pictures inside, but there are some amazing and some pretty gruesome sights to behold. There are scale models of what the town looked like before and after the bombing, as well as lots of belongings of victims of the bombing, including their tattered clothing, skin, fingernails and hair (ew!).

I thought there was a lot of really good information included in the displays but thought things jumped around a little bit (the historical information on the first floor skipped around a lot as to why Hiroshima was designated as a target, making it hard to follow) and the displays for the effects of radiation on people of Hiroshima were the last thing to walk through before the exit, instead of the whole "Why We Shouldn't Use Nuclear Weapons" section, which fell in the middle. I thought they could have set up the order of the displays to better tell the story.

Also, I was bummed that they barely touched on the after-effects of the bomb. And there was virtually nothing to be found on the medical treatment used on the victims or the clean-up efforts made by the city and by other aid groups to make Hiroshima livable again for the victims. I thought both would be important points but they were dismissed with a factoid along the lines of "Within 1 week of the bombing, radiation levels were at 1,000,000th of their initial levels," but they never say what the initial radiation levels were. Or what the half-life of the uranium used in the bomb was (although they did give a figure of how much of the 64kg inside the bomb actually underwent fission--only 0.7kg.) Still, to kill 140,000 people within 5 months, that's not a number to feel good about. But it could have been worse. Much worse.

They also say that radiation does not effect residents of Hiroshima today, but in another display they admit that they don't know what the long-term effects of radiation exposure are. I asked Wes how he feels being stationed so close to a nuclear bombing site for two years. Not so good. Hard to imagine why....

We left the Museum at closing time and headed to a local outdoor shopping center to walk around and catch some grub. We decided on a place that let us grill our on meat at the table. We sat on mats on the floor and concentrated on not burning our dinner and it was awesome! Should've taken photos but I was more concerned with not eating charcoal. After dinner, we found a little bar around the corner to have some sake. We let the bartender and waitress pick for us, which was a wise decision. That was easily the best sake I've had, though I have no idea what kind it was. I've haven't been steered wrong yet by letting the locals pick for me. That's something I'll continue to do all along the way!