Its All About the Yen-jamins!

I've spent a lot of time in transit over the last few days and noticed a disparity over what I was putting in my journal versus what I was blogging about. I liked what I wrote for myself much better than what I put out there for the public, so I'm making it my mission to be more open and honest and a tad less informational (hence my last post on my bathroom experience). Also due in part to the fact that I won't have computer access the way I did while visiting Wes in Iwakuni, so I'll have to make the few entries I can manage to write, count. I know you all care what I'm doing or you wouldn't be reading, but I'd like to give you extra incentive to keep up with me.

I've had lots of thoughts to myself on Japan's consumer culture but have kept mum on things until now. I think I was concerned that my observations would be judged, as they undoubtedly will, but I need to put things out there without worrying so much. That's the theme of this whole adventure--No Worries.

One of the things I noticed right away is that young Japanese women are crazy for fashion! Most of them would rather live in a dump, barely eat and have a closet full of the hottest designer labels. Its a trend in Japan for women to live extraordinarily out of their means in order to dress up. And my, how they rock it out! I wish I had pictures of some of the things that people wear in Japan but I felt awkward snapping incognito photos of strangers. Not that they would have said anything. They're all too polite. Instead, I tried to take photos in a department store and got this shot before I was asked to leave. At the top of the photo you can see the saleswoman's hand trying to block my shot. I pretended not to hear her. I couldn't pass this up! This is what we're dealing with, people! 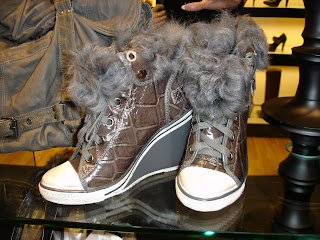 Tennis shoes do not exist here. I swear in 9 days time I never saw a single young lady wearing anything besides heels or boots. Often a combination. I was floored by the (what Wes and I called) "hooker boots" these gals were wearing. I'm talking straight-out-of-Pretty-Woman up to, or past the knees, leather boots with 4" heels! They're EVERYWHERE! I even saw a little girl who couldn't have been more than 10 wearing a pair with a kitten heel! What parent in their right mind is going to let their daughter dress like that???

These girls appear so demure and overly feminine but they are rocking some sick shoes, walking miles at a time, and making it look easy. They might barely be 5 feet tall wearing 4 inch heels, but don't be fooled by their tiny voices or their outward appearance. These ladies are warriors!

As seductive as the footwear is, there's hardly any skin showing. They'll wear the tiniest little micro-mini or daisy duke shorts but always over a pair of tights or with a pair of knee-high socks. And the tops are never revealing or low-cut. Many of them are downright baggy. Especially by American standards. These girls are crazy about some make-up, too! Every morning on the train I see young school girls in their uniforms digging through their huge slouch purses for a mirror and some eye shadow. I don't think I started wearing what most people would consider make-up until I was in college. Maybe grad school. These girls are like 13 years old!

I guess what it ultimately comes down to is that Japan has a thriving economy and a young population with an expendable income. The Yen is far stronger than the Dollar and if I had that kind of money and lived in a big city, I might be tempted to dress just like these gals. Ladies, I salute you!
Posted by Katie Murphy at 3:13 AM