I decided to spend my day in Tokyo seeing the local sights around my hotel. I hadn't researched Tokyo thoroughly enough before arrival (and spent most of my time on the plane ride on the way over goofing off instead of reading up) so I really had no idea what I was going to do once I got there. No worries, I like an adventure. So rather than board the subway completely blind and without a plan, I stuck close by and followed the advice of the local tourist office.


I spent several hours touring the Sensouji Temple and grounds. Its Japan's oldest Buddhist temple for ordinary people. It's focus is on the goddess of Kannon, or "Asakusa non Kannon-Sama." There's an open-air market inside and several smaller shrines scattered throughout the grounds, including a 5 story Pagoda. To get to the temple, you have to walk through a row of shops selling kitchy little souvenirs but you're rewarded with this amazingly large lantern with the Kanji symbol for "Thunder" written on it, which is the symbol for Tokyo. 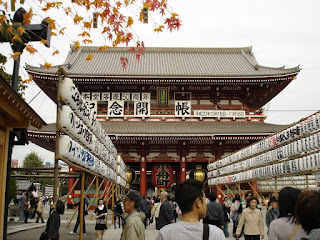 Before heading to the main temple, I found a few Buddhas tucked around the grounds in various places. The photo one is my favorite. The figure on the left is said to bring mercy to worshipers, while the one on the right brings wisdom. I don't know the symbolism of the second photo, as practically everything on the grounds is written in Kanji with no English translations. 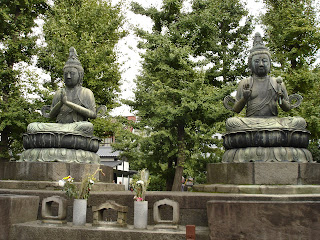 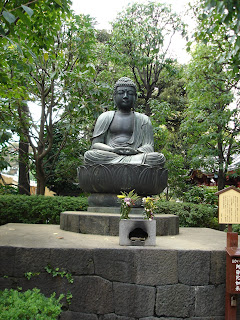 Before heading inside the main temple, I sat outside watching worshipers for awhile. The rituals I observed were interesting and I was doing my best to figure out what was going on, as I had no one to explain things to me (I've filled in some of the blanks by talking to Wes). There were walls of tiny little drawers on both sides of the temple entrance where people would shake this little metal box to try to get a little stick with some Kanji written on the tip. Then they'd replace the stick in the box and find the corresponding drawer with the same Kanji symbol they'd drawn. They'd read their fortune and if it was excellent, they'd either tie it to a tree or to a rack with rows of long pegs. If your fortune was less than excellent, then you're supposed to return to the Temple the following year and try your luck again with a new fortune. Before entering the temple, people who would burn incense and cleanse themselves in the smoke or would wash their hands and mouths at a fountain with several small cups on long wooden poles. 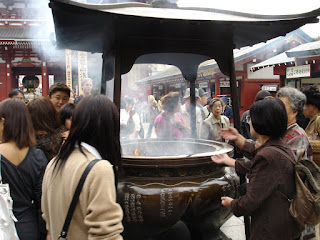 The worshipers had several techniques when it came to washing up. None would ever touch the cup to their lips. The ones who drank would hold the cup above their mouths and dribble water from above. They'd swish it around and spit it out on the ground. Others would only wash their hands. They'd pour water over their hands (always over the ground and never back into the fountain) and scrub. Others got fancy with this technique and would hold the cup perpendicular and let the water run out of the cup, down the stick and onto their hands. Some would wash their hands and their mouths. 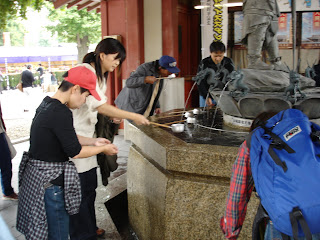 Once inside the temple, worshipers would say a prayer, throw in some money as an offering and move back to allow others to do the same. The main hall was rebuilt several times over the years as it was destroyed by fire and war. The most recent hall was built in 1958. 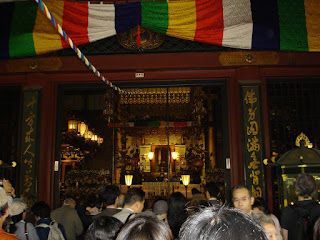 After leaving the temple, I headed West to find the Kappabashi Kitchenware Town, where there are several blocks of wholesalers hocking equipment, utensils, dishes, chairs, etc. that are used in both restaurant and home kitchens all over town. My favorite thing to see was the wax replicas they have of food. Most restaurants across town use these wax food replicas in their window displays instead of having a menu outside. There were lots of really comical options, and those things are freaking expensive!

They take their knives seriously: 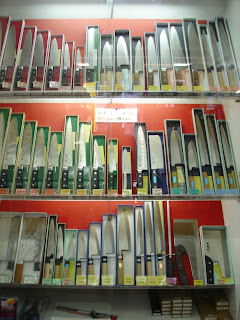 Examples of grilled items. Notice all the pots and grills wrapped in plastic. 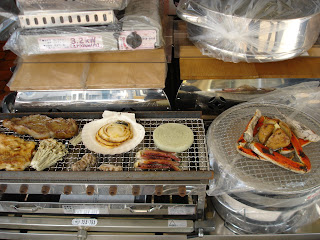 I love this sushi display: 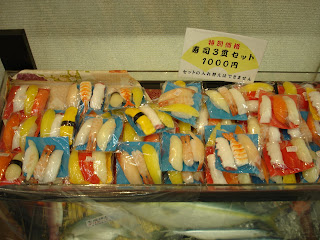 There were lots of things that I wanted to take home with me. I would have happily walked away with a tea set and a bowl set if Japan had been my last stop on the trip instead of my first. But I restrained myself and only walked away with a bamboo roller to add to my sushi set. It fits in my purse, so I feel like that is something that I could haul around for the next 5 months. Wes has offered to ship anything home for me that I find here in Japan. He could be setting himself up for a world of hurt by making that offer. We'll see how the next few days go!