The Olympic Dream Is Dead

Arriving in China was more culture shock than I had expected coming from another Asian country. In such a short time I had gotten used to Japan--how polite and orderly and considerate other people are. Then I arrived in China where people mill about everywhere and make no attempt to move out of the way of oncoming pedestrians or cars, they push and shove, threaten to run you over at any opportunity and yell at you to try their food, take their taxi or buy their merchandise. If Japan is the American South, as cordial and hospitable as you please, then China is Manhattan where people will eat you alive, steal your money and then spit on you. It was a rude awakening.

David arrived here on Thursday night and after taking it easy for a full day, we rented bikes on Saturday and set off into Beijing headed for the Olympic grounds. The ride was long, confusing and I often felt like a bike courrier in DC as we navigated through traffic under threat of life and limb. It took us over an hour to get there with a few minor delays and I was excited to see the Birds Nest rising out of the distance. We made it!!
At first we spent time trying to get inside the track & field stadium grounds but were shooed away from multiple entrances by guards. We could see other people walking around inside and, since we didn't speak any Mandarin, had no idea what they were trying to tell us. We figured out that there was a public entrance around the block and decided that we didn't want to pay to get inside as all the other people were doing. After standing there watching the process, we figured it cost no less than 50 Yuan to get inside and we weren't that interested. Navigating around the track grounds, I got my first taste of the ruin that the Olympic arenas are becoming. Parking lots are fenced in, abandoned and overgrown after only 3 months. Its an odd mix of abandonment, deconstruction and immaculately kept gardens and common spaces all mixed and jumbled around some of the major landmarks like the Birds Nest and the Water Cube. The major tourist attractions are being maintained and continue to draw revenue through insane entrance fees (we figured it would cost us no less than $60 each to gain admittance inside the Water Cube and upwards of $125 for a VIP pass. No thanks.). Directly across the street from some of the lesser venues like the fencing building (which is directly next to the Water Cube), they're actively dismantling a slew of smaller buildings. 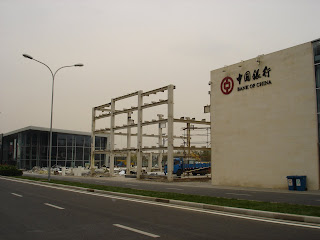 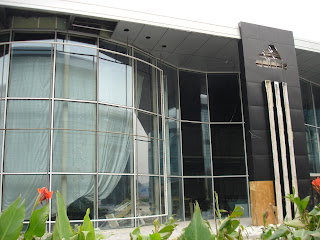 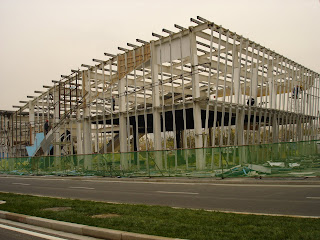 Only 2 months ago, these buildings were actively used by athletes, their friends and families and by spectators. Now they're in shambles less than 500 yards from the big attractions. The multiple subway stations that were installed to shuttle people to and from the widely spaced arenas are now inoperable and closed to the public. I have no idea what these materials are intended for or what they are planning for what will ultimately be an empty parking lot. Better yet, why are they doing this? I thought the slogan of the Olympics this past year was "One World, One Dream." Judging from what I've seen, that dream is dead. Its really disheartening and depressing.
Posted by Katie Murphy at 5:37 AM