David and I have been doing our best to branch out and eat new things while in China. We went out to dinner last night with a guy named Tzs (pronounced Chi) from our hostel in Chengdu, who is an Asian from New Zealand. He speaks Cantonese and can get by speaking Mandarin with the locals well enough to ensure we had a great meal at a duck restaurant last night. We started chatting with him about some of the things we'd eaten in the last two weeks, which we didn't think were that strange (often because we had no idea what we were eating), but he was impressed that Westerners would try some of the more random things that we have.

For that reason, I 'll share some of our daily cuisine...

This is a picture of David eating Ox Tail in Beijing. Couldn't get me to touch it (I know what happens at that end of an ox!) but he thought it was pretty good. 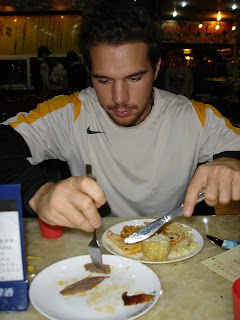 A few nights later, we found where all the street cart vendors hang out so we tried some dumplings, noodles, ostrich, seaweed, and our favorite--snake. They had it in two different ways: whole or just the meat. We opted for meat only (white skewer), since the whole snake looks a little suspect. 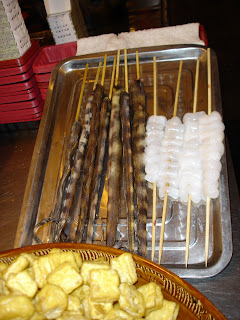 We had some of our favorite finds in Xian. On our first day in town we found more street vendors and had squid for the first time. Looks a little odd, but tastes amazing! Not too chewy either! 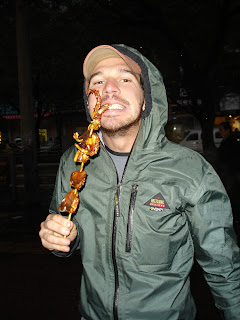 And then last night Tzs ordered a "sampler platter" of various kinds of meat. It included things from beef, pork, beef liver (we'd had a plate of this on its own the night before and LOVED it!), some unidentifiable type of fish part and this: 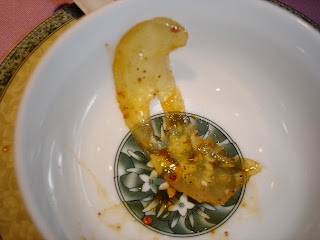 This clear, spicy strip of goodness is cartilage from a pigs ear. Sounds really gross, but it was really tasty. Soft and a bit crunchy. Tastes just like the spice it was sitting in.

And then there was what was (apparently) described on the menu as beef brisket with pumpkin and bread. But when it arrived, it became quickly apparent that it was actually pork belly (which was essentially all fat) mixed with some pumpkin-type stuffing with pumpkin slices underneath. Definitely the most unique thing I've had on the trip thus far, and once you got used to the taste (and past the fact that it was a plate full of fat), it was pretty good. Kind of sweet.

I'm sure we'll have plenty of other things to share as we continue this journey. We still have over a month left in Asia and are in the process of working our way south on our way to Vietnam. I'll continue to take photos of some of the better/weirder things we eat. And just so you know, neither of us has gotten sick from anything we've eaten yet!
Posted by Katie Murphy at 11:40 PM