I had a good flight into Japan yesterday and was lucky that the flight wasn't overbooked. I ended up with an entire row to myself, which was perfect for a 13 hour flight. I had a personal TV and a video game console to keep me entertained and, as a result, didn't get much sleep. I'm not really sure that sleep could have ever really been an option though. As we moved west, we chased the sun and it never got dark during the whole flight. It was an odd experience and a first for me. My body was telling me it was 1am, yet out the window it was mid afternoon. I landed and moved like a zombie through immigration and customs, which went quickly and smoothly.

I had help from folks at the airport figuring out where the ATM was and how to use the public transportation system into Tokyo. I ended up taking the slowest and cheapest train available, which took 85 minutes to get from the airport to the final stop at Uneo. It only cost me about $10, which was great! I had to change trains and transfer to the subway system once I got to Uneo and had help from the subway manager to do so. The process of buying the correct tickets to clear the turnstile was always convoluted, as it was always in Japanese. Nothing here is in English, which makes things quite an adventure!

Anyway, I managed to get to my hotel with the help of the next subway manager and two Japanese businessmen (one of which walked me to my hotel because I couldn't read the signs). I handed the guy at the front desk my reservation information and he repeated back "Capsule Hotel", which meant exactly nothing to me since my reservation clearly said Hotel New Gyominso. Apparently I was in the right building, just the wrong desk. He lead me to the back of the hotel and down a set of stairs and up another set. At the other front desk (which I would have NEVER found alone) I handed my reservation information over again and received a key and a set of linens and had to put my shoes in a locker and trade them for house slippers. I was then directed to the 8th floor and this is what I found: 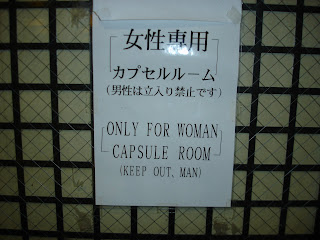 That's right, man! You stay out! The sign puzzled me at first. I thought the Japanese were just very proper about restricting men to their own floor and women to theirs, like in a hostel. But I had booked a single room. Or so I thought. Then I walked in and found this: 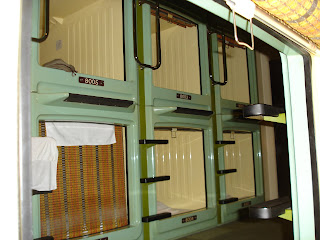 Apparently "Capsule Hotel" is exactly what it's described as! Little rooms stacked on top of each other. There are 24 capsules in my hall. Here's my room: 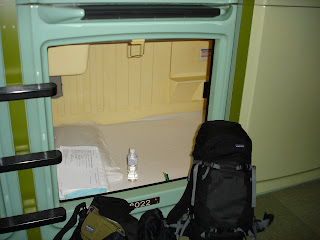 Its got a little TV mounted in the ceiling and a clock/radio combo, light fixture and vent mounted on one side of the wall and a small mirror mounted on the opposite side of the wall. The space measures about 4 x 4 x 7 and embodies everything I thought Japan would be. I sat there inside my capsule last night just laughing at myself for thinking that I booked a private room! What private room in Tokyo is only going to cost $30 a night? Ha! There were only about 8 of us on the hall last night and we all share 4 sinks, 1 wash bin, 3 toilets and 3 what I'm assuming are Japanese urinals for women? I'm still puzzled on this one: 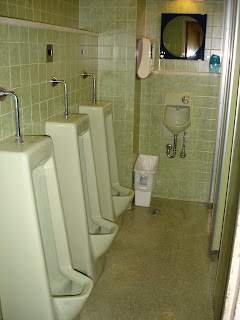 The showers are located on the 9th floor and are decidedly not Western. I should have taken a picture when I scoped them out last night but I was too tired and not thinking clearly. They're only open from 3pm - 9am so I'll get a picture tonight and post it soon. I had my first experience with public bathing this morning, which was interesting. I'll write more about that when I have photos to accompany my story. In the meantime, I leave you with a night view from the top floor of my hotel. 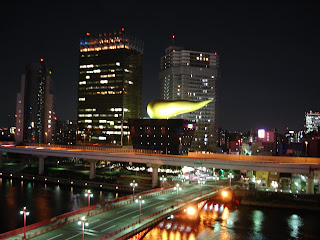