Since David has stopped boating and shipped all his gear home the focus of the trip has once again become tourism. This is my doing, as David would happily boat every single day and not see a bit of the rest of the country. We've spent the last few days running around the country to hit the known hotspots for lots of sea life. And man! Its been great!! We stopped at Curio Bay, which is a beautiful petrified forest that's located on the beach. We got super lucky and managed to see several rare yellow-eyed penguins even though they aren't usually there. 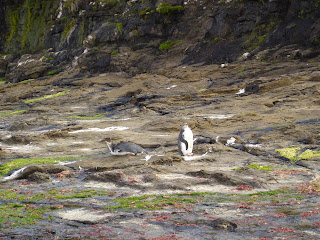 We also went over to the other side of the bay and managed to score a few sightings of the world's smallest dolphins, the Hector dolphins. They use the bay as a nursery, so there were lots of babies around. No luck with photography though. Bummer.
Next, we headed to Nugget Point, where there are seal colonies and sea lions. We scored both! There was a crowd of people on the beach surrounding this huge bull sea lion. I can't believe how close people were getting to this thing! I kept my distance... 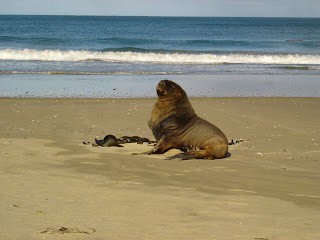 As we were driving up the coast, Dave (my awesome navigator) brought to my attention that we were passing by a place that has blue penguins, which are the smallest penguins weighing only 1 kilogram. Turns out that there's a tour operated where you can actually walk through with an expert inside their man-made nesting area. Blue penguins are unique because they're the only penguins that live in burrows. They didn't let us take any photos and because it wasn't dusk, we didn't see any penguins returning back to their dens from the sea. But we did manage to get super close to some seals! 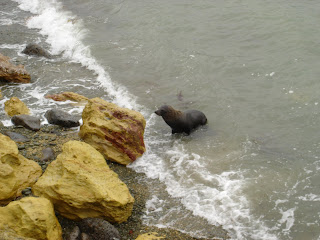 And then today, we went whale watching. I've never seen a live whale before and we were really excited about the whole thing. That is until it started POURING last night. As if that weren't bad enough, we'd been lazy the night before and left part of our dinner in the tent. Dave woke up at 5am because there was something on his sleeping bag. Turned out there was a mouse in the tent!! He got it out by scaring it back through the tent door, which is how we figured it got inside in the first place. We didn't realize how wrong we were until we were packing up and discovered it had chewed a hole in the tent and through the bread packaging. It left us a nice little mouse turd in the bread as evidence. Lovely.
So we'd already paid for the whale watching trip and weren't backing out for a little rain. No way! We arrived to find a prediction of "ideal sea conditions" for our scheduled departure, with "slight seasick conditions" for the departure after ours. I think they got things backwards. The seas weren't nearly as rough as they were returning from Koh Tao in the Gulf of Thailand, but it was still sufficient to turn me several different shades of green. Even Dave, who never gets motion sick, was feeling the effects. I eventually threw up (the only person on the boat who did!), and quickly recovered. I ended up feeling great and even managed to get a last-second shot of a whale's fluke before it disappeared beneath the surface on its way to another deep feeding dive. 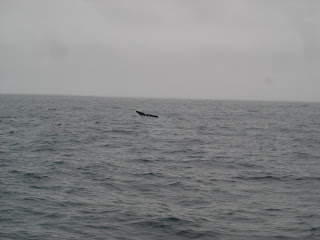 We stopped on the voyage back to the pier to admire a giant albatrose. These birds have up to a 12 foot wingspan! They're really impressive in flight, though we never got to see it. Instead, it bobbed happily on the sea watching us watch it. 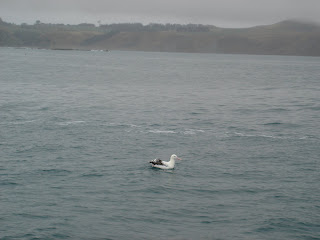 New Zealand has provided several "first" encounters with so much wildlife that I've really managed to get everything out of this trip that I wanted. We leave in two days to head to Australia and I'll be completely satisfied with this trip by then!
Posted by Katie Murphy at 6:53 PM