So again, I'm horribly out of date with posting. But I have an excuse! We've been in the Outback for more than a week and the access to much of anything, as you can imagine, is very limited. We're talking hundreds of kilometers between gas stations, let alone anything else. We'll be on the road for hours sometimes and not see another car. Its great!

As remote a place as this is, its not as remote or barren as we'd expected. We purchased several extra days of food, water and an extra 5 gallon gas tank to put in the trunk for emergencies and planned our stops so we'd never be stranded with an empty tank. Turns out that the roadhouses along the way are usually decently equipped and we've never had a scare about running out of anything except money (we neglected to hit up an ATM before leaving civilization in the Adelaide vicinity). Luckily, we're not in a third world country or anything and everyone happily accepts our credit cards.

We've been touring around the vast nothingness that is the Australian Outback and haven't had as many difficulties as we'd expected. Finding an impromptu camp site next to the road is a cinch, the wildlife (kangaroos and cows) are not often along the road, so no worries there about hitting anything with the car and the weather has been awesome! Nice and warm and dry, with the evenings dipping into the low 70s. Perfect!

The only annoyance has been the flies. We're still not sure exactly how they can handle such dry climates and survive, but where there's a will there's a way. And these flies are certainly determined. They're much more annoying than anything we experienced in New Zealand because they try to creep into your eyes, nose, mouth and ears at any given opportunity to get the tiniest drops of moisture possible. Plus, they bite. Seriously annoying when you're trying to line up your camera for the money shot of Ayers Rock. They only go to sleep at night and they wake up with first light so there are only a blissful few hours of darkness that we get to enjoy outside the tent or the car without being harassed by swarms of hungry flies. It must have rained a few days before we arrived in the Outback because we started experiencing them when the winds would die down. They've gotten so bad that we've both bought fly hoods to wear whenever we're outside. It cranks up the heat factor a few degrees, but at least we're not doing the "Bush Walk"--constantly swatting, spitting and sneezing to keep the flies out of our face.

We're currently in the Parliament's library and I'm having trouble uploading some of the photos I took. I'll back-post as soon as I can so you can check out the amazing scenery. If you're my Facebook friend, you can check it out already, as for some reason I've had no problem uploading them there. Its a bit out of the way but the Australian Outback is highly recommended! Its got the most amazing sunsets I've ever seen in my life! David and I are both happy campers!

Ayers Rock during the day: 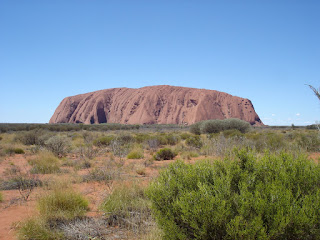 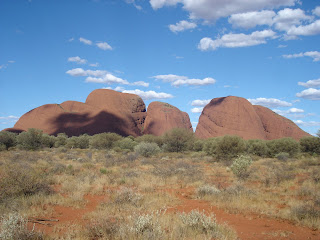 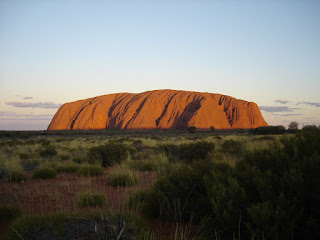