We started this trip in October with fresh haircuts, among other things. We looked all neat, trimmed and tidy for our 10-year high school reunion that we attended less than two weeks before departing. Man, we were styling! 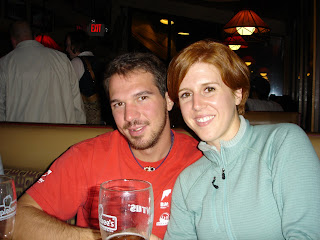 Four months later, that was not the case so much. You could argue that we were just fitting in with the rest of the backpacker crowd, but those are often some well groomed people who travel with large bags of toiletries, hairdryers and beard trimmers. I'd been asked by my mom what I planned on doing with my hair while traveling. She worries about a lot of things and apparently my personal grooming had made the list. I figured I'd either get a haircut along the way or arrive home with 6 months of growth, a huge ponytail and plenty of hair for Jamie to work with as she did her styling magic and gave me another awesome cut. I absolutely hate having hair that is longer than shoulder length. As David points out, it makes me look like a hippie, but I think it makes me look more like a drowned rat. We'd reached that point so it had to go!

Dave was first in line for the haircuts. We're on a budget so instead of going to a barber, we invested in a pair of multipurpose scissors and I gave him a haircut--my first (unless you count the time when I was 10 years old and overheard my mom talking about going back to the barber to have him cut my brother's hair shorter than he'd cut that afternoon. I took it upon myself to save my mom the trouble and butchered Scott's hair so badly that he practically had to have his head shaved by the barber to correct my attempt). Given my track record, I was less than certain about my abilities. David had full confidence in me though, fully aware that he'd have to wander around with a bad haircut if I failed. We took photos to document the progress and I had these great before and after shots of his haircut but my memory card died and I've been unable to recover any photos off the card at all. Instead, I have had to dig back through some earlier photos and try to find a picture of Dave without him wearing a hat or helmet, which is next to impossible because his hair is thinning and he's always wearing a hat to protect his head from sunburn. Many of my other shots of him are kayaking shots, which include the helmet. I realize he's wearing a helmet in this photo but its the best I could do. You can see his sideburns starting to curl and the long beard. Unfortunately, the helmet strap is covering his flowing mane of hair in the back. You get the idea though. 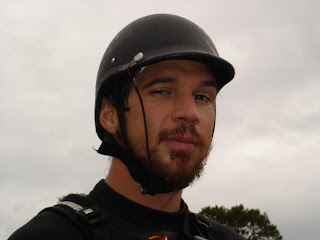 I sat him down in our handy dandy camping chair on a beautiful sunny afternoon and got to work with my rudimentary tools (i.e. multipurpose scissors and a huge, ghetto comb. The kind you buy in a dollar store with really wide teeth). We'd discussed giving him a mullet, as is the fashion here in NZ, or maybe a faux-hawk but he said whatever style I cut I'd have to live with until we got home in April. I decided that as funny as it would be, I'd rather not look at a balding mullet for another two months and he didn't really have enough hair to rock out a faux-hawk. My first priority, therefore, was to cut the back of his hair and work my way up. I've watched the stylists cut my hair for years and did my best to copy what I'd seen. I did okay with things until I got to the left side of his head, when I accidentally sliced into Dave's ear. OOPS!!

I felt really awful, especially since it was a gash about a 1/4 - 1/2 inches long and it wouldn't stop bleeding. After a few minutes to clean the flesh wound and for me to calm down about gashing my lover, I resumed my work and did my best to finish the job. Aside from cutting the left side a little uneven (out of fear of cutting his ear again), I thought I'd done a fairly decent job of things by the end of the haircut. David thought I'd left it a bit long on the top and couldn't figure out why I was cutting it so specifically. He said I'd done a good job but that he wasn't used to the look and thought he resembled college boys he'd hustle while playing pool. After about a half an hour of looking at it, I realized why I'd cut his hair the way I had. Its the same haircut my brother has had for years!

Dave thought it made perfect sense that I'd given him Scott's haircut since its the cut I'd been looking at for a good part of my life. The resemblance was really uncanny. He'd turn his head a certain way and it was like my brother was right there with us. That's not the first time I've experienced that--Cristen Hair pointed it out so eloquently at the football game during out 10-year high school reunion in October when she asked if I was sitting on the bleachers holding hands with my brother. It'd only been that afternoon that I'd first though Dave resembled Scott, so her affirmation hit me hard. Of course I'd never meant to make my mountain-man boyfriend look like a fraternity boy, so we decided that I'd shorten it again in a few days. In the meantime, I trimmed the beard down to a manageable length (so it wouldn't get in his mouth or itch in places). Of course the end result is being held hostage on my memory card, so here's a shot I found of us from this past week after the final trimming, illustrating his shorter look (not too bad, if I do say so myself!) and my scraggle. Two birds, one stone! 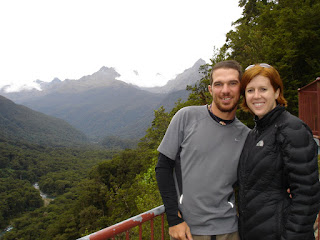 We've been in Queenstown for the last week and something about the humidity levels has been making my usually wavy hair really flat and dry. I've been looking in the mirror at hair that's started to creep past my shoulders and my first reaction is to grab the multipurpose scissors and attack it with everything I've got. And then that awful haircut I gave Scott all those years ago flashes through my head along with the trouble it was to correct the damage and I realize its not worth attempting to cut my own hair. So I sucked it up and went into town and found someone far more competent than myself. Here's the result! 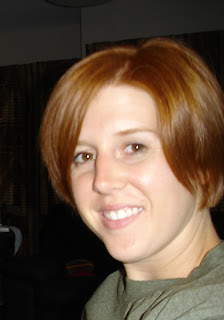 I'm so glad not to have a mullet!
Posted by Katie Murphy at 9:55 PM