Its been (again) quite awhile since my last post. I can only attribute that to a slow couple of weeks, much of which has been spent killing time as David kayaked around the South Island. For me, its been a routine of sleeping late, wandering around the tiny town of Murchison or the slightly larger town of Hokitika while waiting for Dave to come off the river, filling my days with grocery shopping, meal planning and quick jaunts to internet cafes which have been unable to read my camera memory card, making uploading photos almost impossible. This routine hardly warranted much blogging. As the famous backpacker phrase in Thailand adequately captures: "Same Same, But Different." Such has been my routine. Full of the same things each day. Doesn't make for exciting reading or blogging.

There have been a few exciting activities amidst all the boating though. First was our trip to Marlborough, which is the South Island's wine region, famous for their excellent Savigion Blancs and Pinot Noirs. We toured 8 vineyards in two days, sampling much or all of what each vineyard had to offer. New Zealand has been impressive in its wine offerings as far as I'm concerned. Most things on the island are expensive but the wine has proven both affordable and extremely tasty. We've been drinking wine for the past 5 weeks (sometimes more than a bottle a night) and I have yet to have a bad bottle of wine. Even the cheaper bottles are great! The vineyards were often some of the best wine we've had to date, as evidenced by the 11 bottles of wine we walked away with at the end of our tours. Some of that was bought to drink here on the island while some bottles were bought to take home and drink or as gifts. I'm in the process of trying to figure out how to ship some of the wine home while not spending a fortune on shipping (one company will ship 12 bottles for $270 and it will take a month to get there), or ending up with the unfortunate shipping experiences I've had so far.

Out of the 3 packages I've shipped from Asia, the two from China have finally arrived. According to my mom, the package I sent November 30th arrived sometime around January 28th intact, while the one I sent 10 days prior (marked "FRAGILE" on every surface of the box) arrived on February 8th. Here's what my mom had to say about that unfortunate package:

"Well, guess what? Your package that you mailed November 19th arrived today. The mailman was so sorry to deliver a package in such bad shape. Suffice it to say that everything you sent that was china/glass came back broken. The box was pretty squished. He had to bring it to the door in another box because glass shards were oozing out....It must have come by boat and had all kinds of heavy packages put on top. The box was really a mess."

At least it made it. I had already resigned myself to the fact that it was lost in the mail and that all the souvenirs I'd bought in Asia would never make it home. Guess I'll spend some time in April trying to reassemble some of the porcelain bowls I bought in Japan, though it seems the glass tea canister I bought as a gift for my dad is far beyond repair. With that rough treatment of boxes though it makes me nervous about shipping wine....

Anyway, we also did a short hike up to the Franz Josef Glacier the other day, which was part of the mountain ranges that were filmed in the "Lighting of the Beacons" scene in Lord of the Rings. Let me tell you that its some impressive scenery. We were there on an overcast day, but that didn't spoil it in the least! Gorgeous! 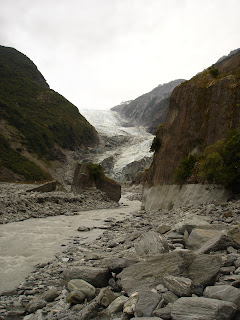 We're currently in Queenstown visiting one of Dave's friends that he met through Couchsurfing.com (Stephan stayed on Dave's couch for a few weeks in Utah last year, so now we're crashing with him!). We're going to do some adventuring with hikes in national parks and visiting seal and penguin colonies on the shores in the coming days, which I'm excited about. In the meantime, I'm enjoying having a kitchen, a bed, a shower, laundry and a computer at my disposal. Ah, civilization!!
Posted by Katie Murphy at 8:04 PM