Vietnam, Where I Swear There Are More Chickens Than People

We've been traveling a LOT lately. Haven't had nearly the same leisure to post as I would normally strive for. Something about not knowing for certain that we can push back our flight out of Bangkok from the 22nd to January 3rd. Until we're certain what we're doing for Christmas and New Years, we're kind of in a hurry to get on the move. I'm a bit concerned I won't have the leisure time in Thailand I was hoping for.

We've been taking the bus more lately that we have done at any other point on the trip thus far. I get terrible motion sickness, something I've had since I was a kid, and David's been kind enough to forgo a few more remote destinations in consideration of my impending nausea. But since the round of food poisoning, my stomach has been able to withstand more bus rides. A little rocking back and forth seems so minor in comparison to what we both endured for the better part of a week. Its given us opportunities to see parts of the country we probably wouldn't have seen (i.e. from the border at Lao Cai to Hanoi). There were a lot of farm animals in China but there are WAAAAY more here in Vietnam. I've seen several pigs, lots of water buffalo, a few cattle, donkeys, cats, dogs, and more chickens that I can possibly count. The title of this blog is in all seriousness. Pork is apparently one of the most common dishes in a country where there is little grazing land for cattle, but oh my lord!! There are A LOT OF CHICKENS!! They're EVERYWHERE! From what I've seen in the last week you could tell me that they outnumber the population of Vietnam 10 to 1 and I'd believe you, no questions.

The animal culture in Asia is so much different than I've ever experienced. Lots of businesses keep their doors open at all times during the day and there are animals running all over the place, regardless of whether you're in a city or not. In the countryside, chickens wander around all over the place. In the city, its dogs and cats that have free run. There are tons of little dogs that run around busy cities, cross major streets with no fear and wander from shop to shop making their rounds. They're quite proud of themselves and know their place in society--off leash and running free. There's an abundance of female dogs with saggy nipples from nursing puppies for several months. NO ONE SPAYS OR NEUTERS! Think about what this does to the animal population. Of course, the dogs here are on the menu and they seem to know it. They're often very skittish around people. I guess you've got to control the population somehow, although I do not and will not support this practice.

Another cultural phenomenon I couldn't quite understand is the constant squatting that people do. People will sit like this for hours on end--street vendors, boat drivers, those waiting for the bus. While it took me a while to understand it at first, there are a few cultural cues that put it into context. First, if you recall from that demonstration photo in an earlier post I did about bathrooms, this is the normal stance for using the toilet. Second, the streets are DIRTY. As I said, you've got animals running around pooing and peeing all over the place. People litter and David and I are constantly stepping over leftover orange peels or charcoal from street vendor's stoves. Its really gross--I wouldn't want to put my bottom on that either! 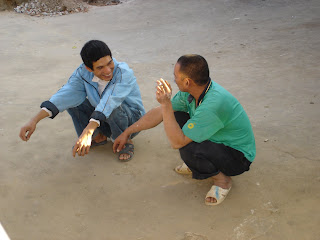 One difference that I love about Vietnam that drove me nuts in China is the lack of spitting. The constant hacking and spitting about drove me bonkers. That phlegmy, guttural sound in the back of some else's throat is almost enough to make me lose my lunch (don't believe me? Ask David.). And it was EVERYWHERE! Even women and little old grannies would spit! As we were sitting in a bus station in China early one morning, I watched a 3-year-old hack and spit into a trash can. They teach 'em young! It offended my Southern sensibilities!! But Vietnam has a distinct absence of that godforsaken sound! The sound of silence (in that regard, at least) makes me love this country all the more!

I haven't been blogging like I would like but that is not a reflection on my appreciation for Vietnam. If anything, it should tell you that I'm enjoying it so thoroughly that I'm not looking for an escape in front of the computer! We'll be here for a few more days, stopping at a beach town in the south for a few days (maybe trying surfing lessons!) before heading to Saigon and then crossing the border into Cambodia. The pace should be quick and steady for the next week or so, especially if we can't confirm a flight change, so I don't know that I'll be able to promise any more frequent posting. I know you all understand. Cheers!