This is the part of the trip that feels like a blur and I'm tragically behind. We've seen two countries in 20 days and I'm having a hard time keeping up with things due to the pace and the lack of continual electricity in some of the places we've been staying. Don't get me wrong, its been relaxing to be off the grid, its just not helping my cause in trying to document what we've been up to. Mothers worry, so attempts must be made.

David and I took a bus from Saigon to Phnom Penh on December 13 on a bus that went straight through the border. I'd heard all sorts of stories about scams you encounter where you buy a bus with continual service only to find out that you either have to change buses at the border and continue on with a new carrier or that the ticket you bought does not, in fact, go all the way through and instead leaves you at the border to fend for yourself. I was nervous about either scenario but we found a place the guaranteed the same bus throughout the trip so I felt pretty good about shelling out $10 each for a ticket. We had been unable to arrange a Cambodian visa before crossing the border so we were relying on our bus driver to make the necessary arrangements for us at the border, a prospect that made me nervous since we'd priced visa services around town and they were charging anywhere between $25 - $50 a pop for what should have been a $20 visa.

The border crossing issue was a completely foreign concept to me. Normally we walk through an orderly line and clear customs one at a time, like in the rest of Asia. But Vietnam and Cambodia are not necessarily the "rest of Asia." To leave Vietnam required handing over our departure cards long before we got our passport stamps. Before we got off the bus, the driver rounded up all the local's passports and handed them in one big bunch to the official stamping passports. Other bus drivers from other groups were doing the same. Which left enormous stacks of passports to be processed for the locals and which also left the foreigners to fend for themselves.

There was no such thing as a line, although it looked like it. What was actually happening was that people were standing around waiting for their names to be called because they had already handed over their passports. David and I figured this out after standing there, passports in hand, watching the whole process for several minutes. He had to find a bathroom and there were none in the immediate vicinity, which meant we had to get through that line somehow. I pushed my way past the 6 or 7 people in front of me (its Asia, that's what people do) and plopped both of our passports on the desk in front of the official. He looked at them and then pushed them off to the side and continued stamping local passports. Eventually, after several minutes, ours were processed too. From there, we got back on the bus and drove 100 yards to the Cambodian side of the border where we had to fork over our passports and pay our driver to handle our visas.

From there we got back on the bus and headed around the corner for lunch while we waited for the officials to process the stack of passports for everyone on the bus. This made me a little nervous--to be out of sight of my passport, the one thing that ensures I can continue my trip, for any real length of time. Sure, we've had to hand over our passports to hotels when we've checked in before, but they keep them locked away. But in this case, we were at the border, where it seems anything can happen. Thirty minutes later we were back on the bus, passports in hand. Things were fine.

We made it Phnom Penh and walked to our hostel. David let me navigate, which may not have been the wisest decision. I have terrific sense of direction most of the time but have left all the fine tuning of figuring out which streets to turn on to him. I got distracted and insisted that we had not made the correct turn, while David stood on the corner beckoning me to follow him because he knew where we were. Turns out he was right. Oops. Then I over-navigated us past the part of town we wanted to be in. Guess I'll leave that stuff to him in the future. One of the perks of dating a Boy Scout!

We only had one night in PP before heading to Sihanoukville, where we spent 3 blissful off-the-grid days at Otres Beach. We stayed in a place called La Casa, owned by a dude from Barcelona. Electricity only worked off solar power during the day (the only time you could charge camera, cell phone or computer batteries) and off generators at night. We stayed in a little grass thatched bungalow about 20 feet from the water, which had no fan and no toilet (there was a shared toilet behind our bungalow). We shared our bathroom (sink & cold water shower) with a family of the biggest cockroaches I've ever seen! And since the roof was ventilated where it joined with the walls, we also shared our digs with some loud croaking lizards, a jumping spider and a huge colony of ants (once they figured out where our food was). And even though David had to rig a system to keep our backpacks off the floor because I originally thought those squeaks I was hearing were rats, and even though we had to share space with so many creatures, this was one of my favorite places we've stayed! 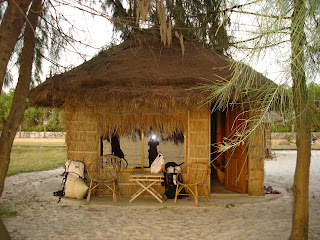 We were fortunate enough to connect buses from Sihanoukville to Siem Reap through PP in one single day. Resulted in an early morning and LOTS of bus time. We were subjected to the horror of a karaoke bus. These things really exist--they have multiple television screens showing videos, a speaker system throughout the bus which is always turned to an unreasonable volume so that no amount of ear plugs or volume on the iPod will tune them out, and to make matters worse, there's a microphone that has a wire long enough to reach around the bus should anyone feel inspired enough to sing. Truly awful!! Luckily, no one sang, because I might have had to kill them.

And on the second bus from PP, the volume was low enough I could think. However, the A/C didn't seem to be working and I quickly overheated. We stopped at a rest area and I made David move out of the way so I could "Go dunk my head in a sink," which can often be a scary thought since there aren't always sinks. The toilets in Cambodia are often force-flush toilets and you're given a small bowl or cup inside a bucket or tub to pour water into the toilet to flush it. At this particular rest stop, there was no sink but I was fortunate enough to find a faucet in the tub instead of having to use the toilet bucket to pour on my head (although I was hot enough, I may have done it). We arrived in Siem Reap around sundown. We'd hoped to be able to catch a sunset at Angkor Wat, as we were supposed to arrive at 5:30 and didn't arrive until 7:00. Having been cooped up on a bus all day, we walked the 6k to our hostel to stretch our legs.

Siem Reap will have to be its own post, since this is getting out of control with length. Suffice to say, we're now in another new country (Thailand) and headed to the beach for the next 10 days, where I have no idea what the Internet situation will be like. Looks like I'm going to end up doing a lot of back-posting to try to do things justice. Sorry to keep you waiting! If I don't post again soon, Merry Christmas!