Yesterday I finished a rigorous 6-day training class to become a river guide. The hours were long, the teachers were tough, and the physical exertion required was intense. I used muscles I didn't know existed and had aches in places that surprised me. Explain to me how your neck gets sore from paddling? Or your legs? No clue. I've got mystery bruises and a pretty severe abrasion on my right hand from constantly scraping against my PFD while guiding. But it was all great fun. This is me guiding on the Lower Animas and Dave sitting in front of me wearing the dorky floppy hat. 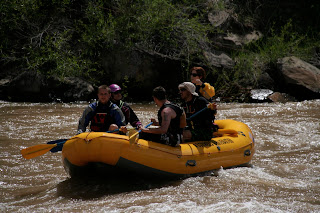 My guide school class was small--only 10 people, which ended up being a pretty awesome number. It meant that we got more time in the guide seat but still had plenty of manpower to move rafts around and get the boat rigging and derigging done in a hurry. It also meant that during our trip on the Upper Animas, the highest and most difficult commercially run river in the country, that we had even numbers in each of the three boats we took along, with the addition of two paying clients. The Upper was my first overnight boating trip and it ended up being a ton of work but it was really beautiful. I spent a lot of time trying to chip in where I could because we were constantly being graded on everything from boating skills to customer relations to teamwork. And those grades make or break whether or not you're offered a job at the end.

We were already given a heads up at the beginning of class that, due to the economy, the company isn't looking to hire very many guides from either of the two guide schools like they did last year. Anywhere from 1 to 4 people will end up with jobs out of the 22 trainees. The competition is fierce and I need a job. I just found out yesterday that I'm only on the office schedule for 6 days in the month of June. Thats not nearly enough to make ends meet. Guiding would be the other way for me to play and earn a paycheck so I'm just crossing my fingers and hoping for the best. I'll also be keeping an eye on the competition since I'll be in the office at least a few days during the second guide school and because Dave is working as an instructor so I'll be able to pick his brain and figure out where I stand. The managment isn't making any hiring decisions until the second guide school is finished on May 31st.

I got so into the routine of being at the shop at 8am every morning and going full on until 6pm each day that I felt a little lost last night at the prospect of having wrapped things up. Its kind of a weird feeling--to be so involved every day with a group of classmates, to be rooting for each other and helping each other out, and then class ends and everyone goes their separate ways again. I really enjoyed the commradere we had as a group and I've been excited to see some of my classmates wander in and out of the shop while I've been working in the office. Right now I'm in a bit of a holding pattern until the end of the month, waiting to find out if I made the cut as a guide. Keep your fingers crossed for me!
Posted by Katie Murphy at 12:05 PM